A Year in the Making

Last year on January 19th, I began typing the first chapter of my YA Viking Fantasy and called the book THE KING OF DAUGHTERS.  The book was conceptualized from this photo sent to me by my sister, laughing about how this was just like us growing up.


After 3 months of drafting, it was done and edits began, then beta notes and more edits. I geared up for pitchwars, the online writing contest. I wanted to see it's potential. And I was surprised I got a few requests, even though it didn't make it in. It gave me enough to know this was something. Then, I received several requests from agents, but nothing stuck. Then came the writer's retreat where I met Jennifer Nielsen who volunteered to read my query, synopsis, and 1st chapter. She gave me incredible advice when I was at the point of really not knowing what more I could do.

Jennifer's advice forced me to cut cut cut and snip snip snip, and away I went for 2.5 months (sadly because of the holidays I couldn't go any faster). I have redone the beginning a few times. I have redone chapters, cut any purple prose I didn't notice before, tightened my writing, made my villain better, and my POV's stronger. And I couldn't have done it without my new CP who was at the same retreat and offered her help in my new goal. My friend, and ANWA buddy, Ann Acton, has been the marsh to my mallow.

On January 19th of this year, I finished my newest round of edits, and sent the remaining chapters to my CP.The name even changed a few times, ending with DAUGHTERS OF ASH, which is super relevant to the story. And I am excited! I know we have much to do, and possibly even areas to consider deleting, especially once she found out there are Valkyries in the story. Haha! But I don't know what the future will hold for this book. I don't know if it will ever get published, as I'm solely looking for traditional publishing at this time, but I'm going to keep fighting for my words to be out there and keep positive.

READING: THE LAST NAMSARA by Kristen Ciccarelli, SOULMATED by Shaila Patel, and almost done with A FOREST OF A THOUSAND LANTERNS by Julie C. Dao

FINISHED READING:  CITY OF SAINTS AND THIEVES by Natalie C. Anderson, a Congo refugee on the hunt for her mother's murderer. I read a lot, I like a lot of books, but there are a select few I will just stay up all night for...this was one of them. READ THIS BOOK!!!
Love your guts,
-Tammy-

13 comments:
Email ThisBlogThis!Share to TwitterShare to FacebookShare to Pinterest

Characters that Speak, Not the Author

As I've worked on my editing rounds from my YA Viking book, I am in the heads of three of the older sisters, as it is told in 3 points of view. Recently, my CP pointed out something to me that I had not even REALIZED I was doing - not speaking from my character's view.

For instance, there were a few times when I was writing as the author, as if I was in heaven and showing the angels what was happening, rather than them looking at it from the character's

perspective. I wondered then how many times throughout the book I had done this. It's easy not to catch because you will likely get so caught up in the story you don't see it or realize you're even doing it. You really have to proactively search for it. But IT IS THERE! Like a snake in the grass - oh my gosh it is there!!

Maybe this is hard to understand what exactly I mean, but maybe a few "for instances" will be helpful.

The author's head: The land was green and rich, lively and serene with birds flying wildly.
The character's head: Lush and lively land covered the earth for miles, more than Amy could imagine or had ever seen. The birds flew wild, much like the ones in her dreams, making her heart pulse with excitement.

The most important part of extracting and re-writing these areas, is to really think like the character. See it from their eyes and emotions. We normally see things and pin it to something else in our past, or judge it in some way. It is human nature, and if your character has any human or humanistic qualities, ensure they do the same! It definitely makes them relatable to the reader!

READS THIS WEEK:  AND I DARKEN by Kiersten White, a series opener with the premise of what Vlad the Impaler would be like if female. The story is very gritty and I enjoyed it! LGBTQ friendly. THE HATE U GIVE by Angie Thomas, a standalone turned movie, with the premise of social/racial injustice. Other than the amount of cussing (which is part of the reason I put it down and then later gave it a 2nd chance), it really does speak out and speak up.

READING NOW: A NIGHT DIVIDED by Jennifer Nielsen, LONG WAY DOWN by Jason Reynolds. I have a couple library and home books to figure out which to start first as I generally read 2-3 books at a time. It's a toss up between SOULMATED, THE LAST NAMASARA, and CITY OF SAINTS AND THIEVES.

MOVIES WATCHED: KING ARTHUR - it was really good, and I loved how they did the talking while showing it already being done. You will have to see the movie to understand what I mean.THE SHACK - my heart cried a million times over just like when I read the book.

11 comments:
Email ThisBlogThis!Share to TwitterShare to FacebookShare to Pinterest

2017 was a crazy, emotional year for me. On January 19th, I began writing a YA Viking fantasy, finishing it in March at 120k words. I was very proud of how quick I had written a book I'd felt so passionate about. Characters came out of the woodwork. Magic I had never attempted before, began to be written. Romance. All sorts of ... things I had never tried to write, were being written. With prayers and faith, I was steadfast in the work. By the end of the year, after not making it in to Pitch Wars after 4 requests for manuscripts from mentors, and after a few agent rejections, a few requests that ended in rejections, and an amazing writer retreat where I met Jennifer Nielsen and got personal sage advice on my query and 1st chapter pages - I began the journey again.

At the end of October, I went back to my book after a few weeks break and rewrote my beginning pages with a new scene (3x now as of a week ago). I rewrote my 4th chapter beginning. I rewrote or cut or shortened the heck out of many words, sentences, and paragraphs. I revamped. And I am still revamping. But this time, something really hit me.

The girls I am writing, the six daughters of a Warrior King, are just that - WARRIORS.

Maybe they are shy, stubborn, earthy, bossy, tomboy-like, but one thing I do know is I am putting them through hell AND high water and they are turning into warriors before my very eyes, and by my very hands. And not just in the sense of fighters, but in the sense of so much more. They honor their family, their people, their Norse gods. They stand for what they know is true and right. They attempt what shouldn't be attempted - crumbling a honored patriarchy system.

Through them, I am discovering how I need to warrior-up and take things more head on. How I need to say no and be okay with saying no when all I really want to do is say no. How I need to take time for myself doing things that keep my faith strong. How I need to foster the relationships in my life that make me feel good about myself. How I need to worry less about silly things and more about important things. How I need to make this book my biotch and get it exactly where I feel it belongs - on a shelf in a bookstore being stared at by a girl looking for something to escape her reality for just a moment. Or a few hundred pages :)

What about you? If you could define this new beginning to one word, what would it be?
Love your guts,
-Tammy- 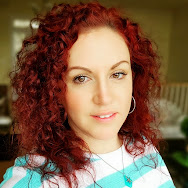