Welcome back, Kristin!! Kristin's book FORGOTTEN released yesterday!! WOOT WOOT and major congrats!! It's definitely not easy to write a book, and to have it published is an even bigger feat in itself! Plus, it's currently marked down with the 1st book in the series, CATALYST! And, there's a giveaway at the bottom of the blog post. too! What a steal!

So, dare we ask what FORGOTTEN is all about?? Let's find out... 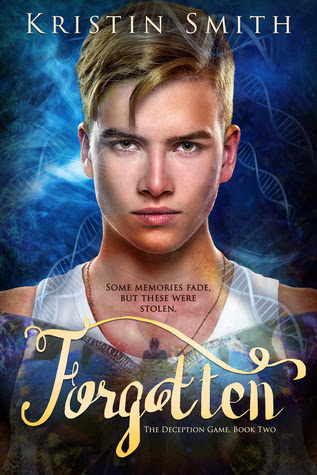 
The epic tale of Sienna Preston continues in this second installment of the exhilarating Deception Game series.

Seventeen-year-old Sienna is no stranger to heartache and loss. But this time, it’s different; someone―or something―has tampered with a loved one’s memories, and she’s determined to get answers.


The trail leads her to the glittering skyscrapers and modern luxuries of Rubex, the Capital of Pacifica, where she infiltrates the government’s Agency for Intelligence and Genetics. But answers are not always easy to come by, especially when her own memories may have been altered. Luckily, Zane Ryder is there to help her put the pieces back together, his devotion and concern muddying the waters between friendship and something more.

When Sienna gets too close to uncovering dark Agency secrets, she’s framed for the murder of a prominent government official, sending her on the run. Sienna’s heart may be torn about who she loves, but none of that really matters anymore―because the only thing that awaits her now is a death sentence. 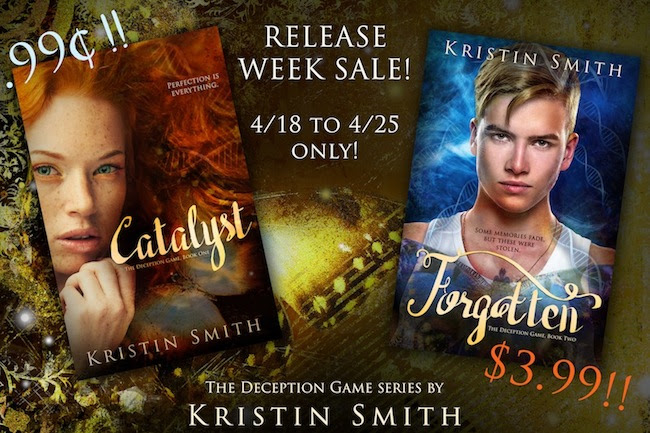 Zane parks his Aria on the lake side of the dam, and we both climb out.

“Bring back memories?” Zane asks with a wry grin.

Zane shrugs. “Maybe I didn’t. Maybe I just wanted an excuse to rescue you.”

My heart trips over itself. “Zane,” I say softly, “you can’t keep saying things like that.”

He moves around the side of the car. “Why not?” When he takes my hand in his, the warmth of his fingers heats up my whole body.

“This isn’t a good idea,” I mutter, but I make no move to extract my hand from his.

He looks down at me, then at our entwined fingers. “But what if it is? What if it’s the best idea in the whole damn world?”

“Because—because you’re engaged. To someone else.”

“But I don’t want to be,” he says, his voice low. He takes a step closer until he’s so close that I could wrap my arm around his back if I wanted to.

“Zane,” I warn, but the warning gets caught in my throat. He’s giving me that look. The same one he gave me before he kissed me that first time on the couch in his house.

“Please, don’t—” But he’s already leaning down, his eyes focused on my mouth. My breath comes out shaky as his fingers slip from mine and his hands touch my waist, gently bringing me closer. Before I can stop myself, our lips meet, and a thousand nerve endings converge to a single spot. His lips are fire and warmth and need. And that single spark ignites an already-smoldering flame. 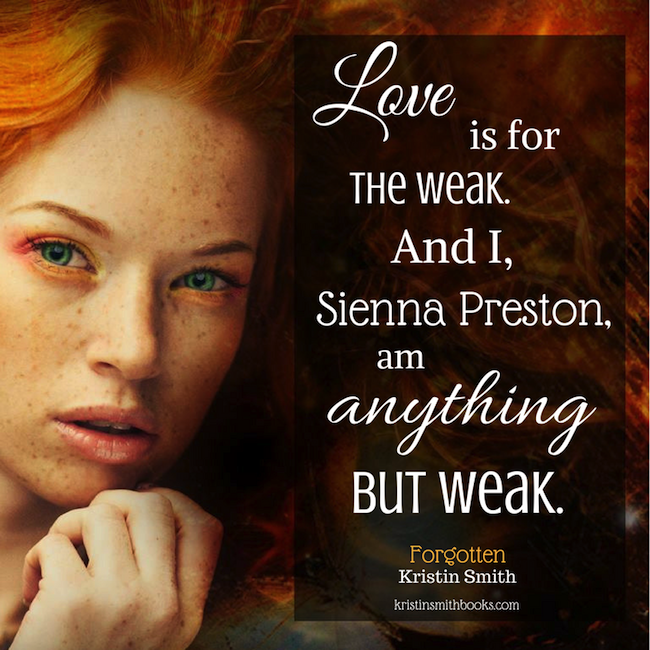 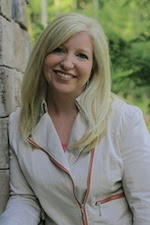 Kristin Smith writes young adult contemporary and science fiction novels. When she’s not writing, you can find her dreaming about the beach, beating her boys at Just Dance, or belting out karaoke (from the comfort of her own home). Kristin currently resides in the middle-of-nowhere North Carolina with her husband and five incredibly loud but extremely cute boys. To read more about her obsession with YA novels or her addiction to chocolate, you can visit her at kristinsmithbooks.com.

9 comments:
Email ThisBlogThis!Share to TwitterShare to FacebookShare to Pinterest

Guest Post by Kristin Smith: Love Triangles - Do They Work?


The LOVELY and BODACIOUS Kristin Smith has stopped by to give a little 4-1-1 on Love Triangles. The big question is - DO THEY WORK??? Let's find out what she has to say about all the love triangles in the literary world!

I know there's quite a bit of controversy about "The Love Triangle", a trope that is often seen in YA books. So the question I pose for you is, do love triangles in YA books work?

Let's first take a look at some bestselling YA books that have a love triangle.


1) Twilight by Stephenie Meyer: Bella with Edward and Jacob


I know there are many naysayers who didn't like the whole Twilight saga, but I'm sorry, this love triangle was EPIC! Fans of the book were divided on their love for Edward versus their love for Jacob. And some people were downright MAD when Bella chose Edward. (I was NOT one of those, by the way.) Did this love triangle get people invested in the book? Did people want to know who Bella would choose? Absolutely! In my opinion, this love triangle was a huge success!
2) Hunger Games by Suzanne Collins: Catniss with Gale and Peeta
I think this love triangle was a little more subtle. The book starts out with Catniss having "hidden" feelings for Gale, but she spends the rest of the book with Peeta either preparing for the games or in the throes of the game. As a reader, it was hard for me to connect with the idea of Catniss and Gale being together because I hardly saw them together during the book. I know there were some Gale fans out there, but in my mind, it was Peeta. It was always going to be Peeta, even though Catniss spent 80% of the books only "pretending" to be in love with him.

Did this love triangle work? I would say yes. It created just enough tension that left the readers wanting more.


The Selection by Kiera Cass: America with Aspen and Maxon
Okay, so this one was a little frustrating for me. I didn't see anything good that would come from America ending up with Aspen. At the beginning of the book, she claims he's her one true love, but then she falls so quickly for Maxon. And, hello, Maxon is a PRINCE! And with America by his side, they could better their country together. Every time America snuck off to do something romantic with Aspen, I felt a little uneasy. I wanted to shout at her, "Get back to your room! You don't want Maxon to catch you kissing Aspen!"

Did this love triangle work? Well, I devoured the entire series in the space of 3 days, so even though I didn't AGREE with some of America's decisions, I would give a half-hearted yes. I loved the series; now whether or not the love triangle added to that love, I really can't say.

Now, I've shared with you a few of my favorite book series, and they ALL have a love triangle. The last one is from my own book (and you'll have to be the one to decide whether or not this love triangle works). :)

Catalyst by Kristin Smith: Sienna with Trey and Zane 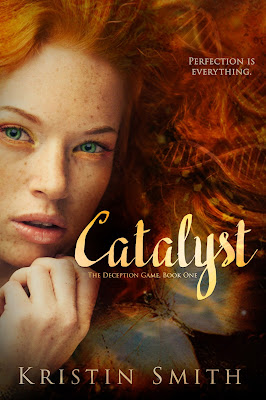 Basically, amidst all the craziness in her life, Sienna develops feelings for a genetically modified poster boy (who is completely off-limits because he's been engaged since birth to his perfect genetic match). But when she joins the extremist group, the Fringe, their young leader (who's too hot to be bad) takes an interest in her. There's tension, conflicted feelings, and some pretty awesome kissing scenes. But you'll have to be the judge of whether this love triangle "works".


So to sum it up, if we're deciding whether or not a love triangle works based on the success of the book, then I say with a resounding YES that love triangles WORK! Our main goal as an author is to entice readers to want to read our books. And if a love triangle is executed well, I think it can add tension and dynamics to the story. I personally don't mind a good love triangle, and I will gladly read a book that has one.

What are YOUR thoughts? Do love triangles work? 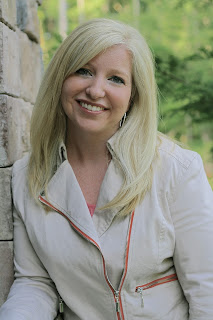 Kristin Smith is the author of the young adult novel Catalyst and its sequel, Forgotten. When she’s not writing, you can find her dreaming about the beach, beating her boys at Just Dance, or belting out karaoke (from the comfort of her own home). Kristin currently resides in the middle-of-nowhere North Carolina with her husband and five sons. To read more about her obsession with YA novels or her addiction to chocolate, you can visit her at kristinsmithbooks.com.


Thanks so much for stopping by, Kristin!! Don't forget to buy your copy of CATALYST and see for yourself how you like her version of a love triangle! *click here to redirect to Amazon!* Next week, come back to see Kristin talk about her new release, FORGOTTEN!!
Love your guts,
-Tammy-

6 comments:
Email ThisBlogThis!Share to TwitterShare to FacebookShare to Pinterest

Have you ever read back lines from your main character, your protagonist, and thought: Wow, he/she is kinda...wimpy. For shame! But they can't be wimpy! Well, mine can't be wimpy. NOOOooooooo... (deep breaths).

I had this same experience happen with the oldest sister in my YA fantasy. She was supposed to (wo)man up, but after reading her back, she wussied up. And that is NOT cool. In fact, her younger sister was more brute than she. What the what?? Nah. Some changes had to be made!

The good thing is, the fix was easy. Truly. And fixing your wimpy character into a more (wo)manly character is easy, too. Here are some quick tricks to get your character to re-establish their role of cajones holder.

1. Paralanguage - stop making them timid, make them have a "straight spine". Look for descriptive words with their paralanguage and tweak them to say more profound/regal things.

2. Language - simply put, try not to make them "ask" so much as "demand". The character should tell people what to do, rather then ask if they're willing to do it. I made this change in one line, and the difference was astounding. (caution: not everything is a demand because that's just...rude. 😉 )

4. React with Purpose - BUT if there is going to be problems happening, because there always needs to be, then make sure they react headstrong and not cower. The old phrase "move with a purpose" is very relevant here.

5. Think and React - sometimes strong characters need a moment to show vulnerability before they react strong. This shows a very human side we all have, and the reader relates to. Once that second-guessing part happens, return to react with a purpose. That will show a super strength of going beyond our own doubts and striving to prove even our own selves wrong.

BOOM. There you have it!! Do you feel like you can get your protagonist's cajones back in place now? Good! The best part of revisiting some of the wimpy stuff and revising back to headstrong, was that I didn't keep reverting back to those wimpier lines. And don't think your character needs to be gun-ho every single second. Make sure to dash and sprinkle plenty of those "I am human" moments where weakness creeps in every so often. Well, good luck out there, and keep on writing!!

READ: Falling Kingdoms by Morgan Rhodes (murder creates havoc amongst 3 kingdoms), Ever the Hunted by Erin Summerill (girl on risky adventure to figure out her father's murderer), Norse Mythology by Neil Gaiman (camp fire tales of Norse gods/goddesses lives)
STILL READING: A Face Like Glass by Frances Hardinge (ARC), and Throne of Glass by Sarah J. Maas
MOVIES: Trolls (cute but not that cute) and Beauty and the Beast (Great but not as brilliant as everyone built it up to be)
WORD COUNT ON YA BOOK: 59,403 (that non-round number is murder!!)
WHAT IS DRIVING ME CRAZY: new book idea I can't start
WHY NOT START: because I know I won't stop, and I need to finish this one first!

QUESTIONS TO THE READER:
1. What is a wimpy characteristic you find yourself accidentally giving your protagonist?
2. What is one "wimpy" trait of your own?
3. Am I wimpy?? 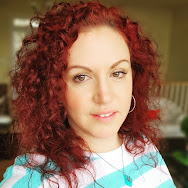